You are at:Home»APP-APSM»Regional Challenges to Japan’s Next Prime Minister

Published with Permission courtesy of the BESA Centre 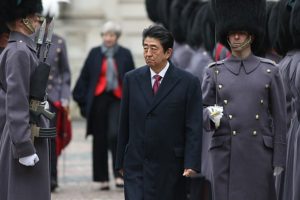 EXECUTIVE SUMMARY: Shinzo Abe served four terms as PM of Japan and is the longest-serving PM in the country’s history. On August 28, 2020, he announced his resignation for health reasons. While politicians and pundits debate his legacy, others are focusing on the challenges his successor will face. In addition to reigniting the Japanese economy, the new PM will have to cope with threats and challenges from Washington, Beijing, Seoul, and Pyongyang.

The recent announcement by Japanese PM Shinzo Abe that he will resign from office for health reasons sparked campaigns by potential successors and opened up a debate about his legacy, particularly with regard to Japan’s economy. The rejuvenation of the economy, which is feeling the effects of the global recession caused by the COVID-19 crisis, will likely be the next PM’s top priority. Abe’s leadership on matters of security led to changes in Japan’s defense policy, and his successor will have to decide if Japan will continue to expand national defense capabilities to deal with regional threats (China and North Korea) or reverse Abe’s course.

In his last year in office, Abe was faced with a brand new challenge that affected the entire world: COVID-19. His government was criticized for not implementing an effective strategy to cope with the virus. One outcome of the crisis was the delaying of the 2020 Olympic Games, which had been set to take place in Tokyo in 2020, to 2021, an unwelcome development for which many blamed the government.

The challenges facing the new PM will be broad and deep.

Japan was expected to increase its share of the cost of US forces deployed there, and the trade balance between the states led Washington to increase its pressure on Tokyo to change its trade policy. Another serious issue was Washington’s policy toward Pyongyang. Tokyo was concerned that President Trump might reach a deal with Kim Jong-un without considering Tokyo’s interests, especially with regard to North Korea’s short- and middle-range missiles.

Tokyo’s relations with Washington will be influenced to some degree by the result of the upcoming US presidential election, but it is unlikely to lead to a serious rupture. Donald Trump and Joe Biden might differ in their approaches to Japan in terms of trade and security, but neither is interested in harming the states’ solid relations. Tokyo understands the importance of the US-Japan security alliance and the costs of maintaining it, and Abe’s successor will want to keep the relationship strong.

China-Japan relations: China challenges Japan in a variety of areas. There are political tensions between the states over the sovereignty of the islands, and there are military tensions on the sea lanes. Beijing’s projection of power threatens Japanese interests in several ways. The battle for Asian hegemony between Tokyo and Beijing is being played out in the AIIB, the Indo-Pacific partnership, and other regional forums, and Japan is being drawn into the trade war between China and the US.

South Korea-Japan relations: Despite their common interests, tensions between Japan and South Korea have risen in the last two years over historical, legal, and political issues. Relations between these states have great potential, but political obstacles prevent them from reaching an understanding that will allow them to heal the wounds of the past. The new Japanese PM might be able to bridge the gap if he can overcome the conservative political forces in Japan.

North Korea-Japan relations: North Korea poses a security threat to Japan, which is why Abe was so apprehensive when President Trump began negotiating with Kim Jong-un. Abe’s government feared that Japan’s security concerns would not be sufficiently taken into consideration by Washington if a deal seemed possible with Pyongyang.

In the last decade, Tokyo has expanded its defensive military capabilities by acquiring missile defense systems, expanding the range of its combat aircraft, purchasing drop tanks and refueling planes, and upgrading its deterrent force. The new PM will have to continue building the country’s deterrent capabilities while looking for diplomatic ways to ease tensions with Pyongyang.

Dr. Alon Levkowitz, a research associate at the Begin-Sadat Center for Strategic Studies, is an expert on East Asian security, the Korean Peninsula, and Asian international organizations.