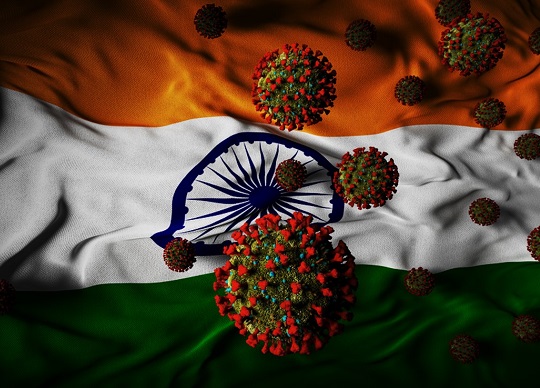 A programme of equable genocide seems to be unfolding across India as a brutally mishandled COVID-19 crisis is seeing bodies piling up in crematoria against the backdrop of a crumbling healthcare infrastructure.

It is a catastrophe of biblical proportions as funeral pyres blaze and cemeteries jam with bodies of those felled by the virus or by endless waits outside hospitals that have run out of beds, ICUs, medical oxygen and supplies, life-saving drugs – and vaccines.

In unprecedented – and grisly – scenes, states like Gujarat are seeing up to four bodies piled onto one pyre, whereas in Ghaziabad, in Uttar Pradesh, rows of bodies are being burnt in the streets as cremation and burial grounds run short of space. Morgues are unable to cope with the barrage of corpses. Overwhelmed hospitals are cramming two patients to a bed, or at times on the floor in passages, even as numberless COVID-afflicted have died while shuttling from hospital to hospital in search of beds.

The anguished cries of the grieving rise above the unabating wail of ambulance sirens as the attention of the Central government, or Centre, remains riveted on campaigning for elections in four states – West Bengal, Tamil Nadu, Assam and Kerala – and in the Union Territory of Puducherry. The phased-out polling began on 27 March and lasts until 29 April, with votes being counted on 2 May.

As the second wave of infections inundates India more treacherously than the first, swelling the country’s caseload to among the highest globally, after the US and ahead of Brazil, people urged the government to postpone the elections on fears they would be “super spreaders” of the virus. The government went ahead, Prime Minister Narendra Modi and other national leaders holding mass rallies in these states where almost all – including themselves – were without masks and social distancing.

Similar futile appeals were made for calling off the religious festival of kumbh mela – the largest congregation in the world, with usual turnouts of 35 to 50 million – being held on the banks of the Holy Ganga in north India from 1 to 30 April.

These events are occurring even as almost half the country is under strictures imposed under the Disaster Management Act to break the chain of virus, and even as Modi repeatedly cautions the public, “If you are careless and going out without a mask, you are putting yourself, your family, your family’s children, and the elderly in great trouble.”

However, Modi’s ruling Hindu right wing Bharatiya Janata Party (BJP) did not want to antagonise India’s Hindus, who constitute 79 per cent of the population and comprise the party’s vibrant electorate. Moreover, in the very manner the government had disastrously delayed preparing for the pandemic early last year as it was busy pulling down the opposition-ruled government in the state of Madhya Pradesh and in focusing on arrangements for then US President Trump’s 36-hour India visit in February, this time too it spent considerable time on wresting defections from the main opposition party in the electorally crucial West Bengal.

As vaccine stocks ran dry, derailing the objective of achieving herd immunity through inoculation, the Centre went into denial and accused opposition-ruled states of politicising the matter. In lashing out at one such state, Maharashtra, of which Mumbai is the capital and which is the most afflicted by the virus and was seeking vaccine supplies from New Delhi, Union Health Minister Harsh Vardhan said, “Throughout the last year, as the Health Minister of India, I have been a witness to the misgovernance and utter casual approach of Maharashtra government in battling the virus.”

It was only when vaccine shortages gripped other states and the daily toll kept on surging that the government acknowledged the grim situation. Again, when Maharashtra ran out of medical oxygen and its Chief Minister telephoned the Prime Minister’s Office for supplies, he was informed that nothing could be done as Modi was on his way to West Bengal for campaigning. This time, Railway Minister Piyush Goyal criticised the state government, “Maharashtra is suffering from an inept and corrupt government and the Centre is doing its best for the people.” Later, his government announced it was importing 50,000 tonnes of oxygen.

At his rally in West Bengal, Modi mockingly admonished the crowds: “I have a grouse against you – look at the staggering numbers you all have come out to greet me!”

The Centre’s response was no different to an acute shortage of Remdesivir, a broad-spectrum antiviral medication that is said to hasten recovery for COVID-19 patients. Despite reports of largescale theft, black market sales, counterfeiting of the drug and even its clandestine export, Health Secretary Rajesh Bhushan asserted, “There is no shortage of Remdesivir.”

The stressed public feels victimised by the Centre’s political battles with opposition states.

Aggravating their plight has been the government’s ‘vaccine diplomacy’ in exporting 64.5 million doses of vaccine to 84 countries across the world earlier on in the second wave, when only 52.1 million doses had been administered in India.

Till now, since vaccination commenced on 16 January, India has administered a total 122 million doses of the domestically produced Covishield of Serum Institute of India (SII)/AstraZeneca and Covaxin of Bharat Biotech, both to be administered in two doses. Even with additional vaccines being imported over time, it is anyone’s guess when the eligible from among India’s 1.35 billion will be covered.

Justifying the vaccine exports, the Prime Minister affirmed that “India was ready to save humanity”, a view echoed by other government leaders, with the twist that it is Modi personally who is the saviour of mankind.

This orchestrated acclaim is widely believed to promote Modi’s eligibility for this year’s Nobel Peace Prize that will be announced in October and the 329 nominees of which include the World Health Organisation for its COVAX programme to secure fair access to COVID-19 vaccines for poor countries.

This prompted Maharashtra Cabinet minister Nawab Malik to state: “If all vaccination certificates carry the Prime Minister’s photo, then the death certificates of the COVID victims should also bear his image.”